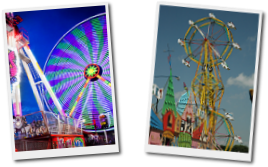 Organization News
Ed Murphy of Modern Motors Passes
By: SLA STL
Monday, January 30, 2017
Ed Murphy of Belleville, Illinois based Modern Motors passed away on January 27, 2017.  Ed was known throughout the industry as a truck salesman to the carnival industry for years and was always able to lend a helping hand to his friends and customers.  Although Modern Motors went of of business 15 years ago, Ed still worked selling new and used trucks on a smaller scale.  Our thoughts and prayers go out to the Murphy family and their friends.
According to the Showmen's League of America, Andy Schoendienst spoke with Ed's son, Michael, who wanted everyone to know the funeral arrangements are still being worked on but consideration for the showfolks is right up there with the family.  And, in lieu of flowers or any other form of tribute, Ed wanted all memorials to take the form of donations to:
Showman's League of America, St. Louis Chapter, Scholarship Fund.
c/o Phil Tomber 2311 Chestnut st. St Louis MO 63103
Funeral arrangements will be posted as soon as they are announced.